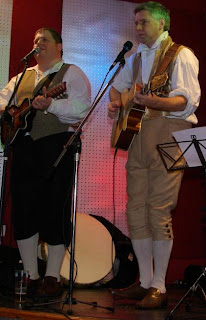 Last Saturday saw a unique collaboration between myself and Cammy Goodall - another keen Burnsian. We are both members of Bowhill People's Burns Club and joined forces for a two-man show in The Bowhill Hotel, Cardenden. Again, based around Burns' life story, illustrated by Powerpoint and featuring his most loved songs and poems, the show attracted around 60 club members and guests. Cammy added poems such as Death and Dr. Hornbook, and joined in with some of the songs. A generously supported raffle raised a considerable sum for Cancer Research and feedback from those present was very favourable.
For more photos see here
Posted by keltickev at 13:23