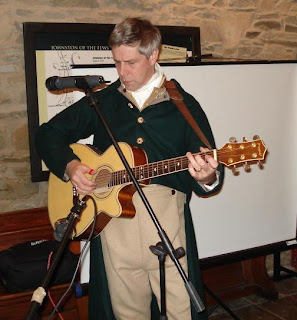 I was delighted to take the 'Bard' to Northern Ireland this weekend. A huge thanks to my colleague Anthony who has been working hard to set the trip up. As part of the Altnaveigh House (in Newry) Burns Gala Festival, I had two appearances. The first was in Creggan Church of Ireland Parish Hall, in Crossmaglen. I was overwhelmed to have a full, and very responsive, house on this first trip. Only a short week of advertising produced a mixed age range of enthusiastic listeners. Indeed some had travelled an hour and a half to get there which was amazing. Hopefully I can get out to Fermanagh and take the show to them later in the year. 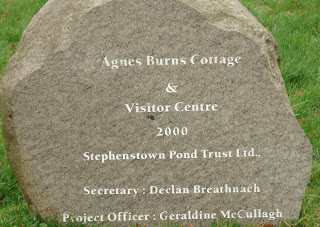 I also had the chance to visit the grave and cottage of Agnes Burns - Robert's sister - who moved out here with her husband some time after Robert's death. Her man - William Galt - was brought over to build Stephenstown Pond, near Dundalk in Co. Louth, making such a good job of it that he was given a good salary to stay on and manage the estate. The cottage which they stayed in - rent free - is now a tea room and has some interesting photos and copies of letters from Agnes to her (and Robert's) mother, back in Ayr. 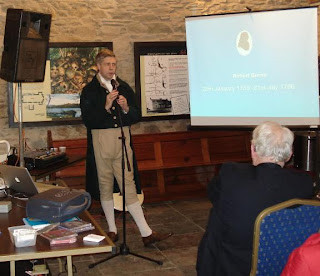 The crowd were so keen I stayed and performed for about 3 hours delivering the old favourites such as Tam O Shanter and A Man's a Man, among many others. Lots of interest expressed in more shows so I will try to get back again.
The second show of the trip was a Gala Dinner in Altnaveigh House in Newry....more on this later!
Posted by keltickev at 08:50

Thanks to Kevin for a very enjoyable journey back 250 years to the life and times of Burns and for making the journey to Crossmaglen. I was the one who travelled the hour and a half with a few other members of Fermanagh Ulsterscots Society and it was worth every mile. We hope to get Kevin to travel further west to Co.Fermanagh later in the year. Discussions are in progress!
It was a fantastic evening with a very talented and enthusiastic performance from Kevin, he kept the audience enthralled and spellbound for the entire performance.Thanks Again